Standing Together Against Real Slavery is a survivor-based organization dedicated to supporting and empowering young women who have experienced or are at high risk for commercial sexual exploitation (sex trafficking). STARS is located in Toledo, Ohio and offers a unique crisis prevention/intervention program with personalized case management and mentorship. Our goal is to restore hope, cultivate purpose, and revive self-worth in today's misdirected and neglected girls. We offer a safe, nurturing environment with a holistic approach toward physical, mental, emotional, spiritual growth and development. We work with and advocate on behalf of our women, girls, and their families. We help connect them with the best resources and most appropriate agencies, and we support them through any criminal cases against sex traffickers. We recognize that our girls may need specialized services to meet everyday challenges while working toward short and long-term goals. At STARS, we offer stability, hope, and healing while fostering personal growth and promoting success within those who desire to make positive changes within their lives.

Along with intervention, STARS strives for prevention and community awareness. We work with vulnerable populations of adults and youth to educate about commercial sexual exploitation/sex trafficking and to intervene against high-risk behaviors. We address and discuss a variety of societal, interpersonal, and personal risk factors like substance use, bullying, mental health, domestic violence, intimate partner violence, and sexual abuse/exploitation. At STARS, we believe in survivor leadership and mentorship – victims/survivors will bond and trust with those who have experienced similar trauma. Survivor mentors help to guide and encourage others who are struggling or at high risk for failure within the system. Through street outreach and a 24-hour crisis hotline, we are here to connect with and support Toledo's most vulnerable women and girls. STARS serves the community by bolstering a social system already overwhelmed with clientele. Thank you for your support in preventing commercial sexual exploitation/sex trafficking and protecting victims/survivors. Take action now, contact us and find more ways you can help. 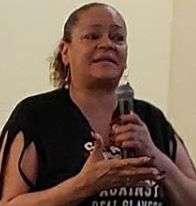 EleSondra "Ele" DeRomano is a survivor of commercial sexual exploitation/sex trafficking, a local and national consultant, a motivational speaker, an advocate against all forms of exploitation, and the Founder of Standing Together Against Real Slavery (STARS). Since 2004, Ele has worked with women and youth who are at-risk for a myriad of factors, including sexual assault/exploitation, domestic violence, street and gang violence, and substance abuse/addiction. As a self-described "ex-crack addict and ex-prostitute", Ele is uniquely capable of mentoring exploited and at-risk women and girls with her direct yet nurturing approach and personality. She offers brutal honesty but creates an atmosphere of hope for women and girls who have been abandoned by society.


Ele has lived an extraordinary life overcoming many obstacles. Ele's father had prostituted her mother, along with other women and girls, through an organized network of gang and pimp-controlled prostitution in Detroit, MI. In response to a sign of disrespect, Ele's father shot and killed two men, both drug dealers. Ele was then placed in foster care at the age of four. Within the foster care system, Ele experienced years of physical and sexual abuse. She says this taught her "how to take a beating and how to tolerate sexual molestation." Ele was later returned to her mother but she continued to endure physical and sexual abuse at the hands of her mother's boyfriend. Tired of the abuse, Ele says she "hit the streets". By age eleven, Ele had graduated to a world of gangs, drugs, street violence, and forced prostitution/sex trafficking. By age thirteen, Ele had been sentenced to prison where she was known as "Hustler #34257".

At age seventeen, Ele was released from from juvenile detention and placed with a Christian foster family in Toledo, OH. Ele initially rejected the family's attempts at love, guidance, and supervision. She returned to the streets, this time in Toledo, where she was introduced to crack cocaine and again forced into a life of prostitution. After several years, Ele had finally had enough. While working for the House of Emmanuel, Ele realized she needed to do something to move forward from her past. "I needed to step up and do something to help kids," says Ele. "I had to tell my story and make a difference.”

Ele then founded Wake Up Youth, a program designed to educate and empower inner-city youth. "Many of these kids are very naïve and do not understand the path they are being led down," Ele says. "I am trying to help educate them and get them off the streets and onto a better path.” In 2005, Ele assisted the Federal Bureau of Investigation with their "Precious Cargo" case in Harrisburg, PA, which involved numerous child victims of sex trafficking from Toledo, OH. Ele's work has been recognized around the country. In 2009, Shared Hope International published Renting Lacy: A Story of America's Prostituted Children, in which Ele's story was featured along with other survivors. In 2011, Ele closed Wake Up Youth; the program was restructured to form what is now Standing Together Against Real Slavery (STARS).

Ele recalls the many names she has been called over the years, including "ho", "crack ho", and "disposable". Today, Ele is called "Momma" and is known as a fierce leader and champion for vulnerable young women and girls.


Ele spreads her message of hope and inspiration through Ohio's prison systems, youth programs, and, most importantly, the streets. Unlike other privately-funded non-profit organizations with similar objectives, Ele focuses primarily on street outreach. "God took me through what he took me through to get me to where I am today," Ele says, "to use me as a tool to educate and help people, to say that, ‘If I can do it, you can do it'." Because of her past, Ele has the extraordinary ability to connect with women and youth trapped in cycles of substance abuse, violence, and exploitation in a way that others cannot. "I speak [to them] from experience,” she says. Elesondra De Romano tells us why Toledo is ranked #4 for recruitment in human trafficking. WATCH VIDEO

Ele's dedication to helping other women and girls is the foundation of STARS. “If there is a girl out there who has contacted me and I can’t reach her," Ele says, "it bothers me. I take it personal. STARS is a part of me; this is my passion and dream.” Ele created one-of-a-kind programs such as the Girls Crisis Prevention/Intervention Program and Outreach for Survivors of Prostitution. These programs foster love and trust to a sector of our society that is too often lost and forgotten. She shares her knowledge and expertise with professionals and communities across the country, as well as youth in inner-city schools facing gang and street violence. "I don't want sympathy for what I went through," says Ele. "I want people to have sympathy for the girls still being trafficked...I hope my story can help them through tough times.". To support Ele and her work with STARS, please DONATE HERE

I can never get back what was taken from me. But I can build, and if I can save a young girl's life, then it's worth me telling my story, and trying to do anything that I can. – EleSondra DeRomano, Founder of STARS

We get to the heart of the matter, from the church to the street. No area is off limits. Outreach and awareness are integral components of Standing Together Against Real slavery. Our 24 Hour Crisis Hotline: (419) 280-2451 is available 24 hours a day, 7 days a week.

We can only fix the problem if we know that one exists. Self-awareness, community awareness, and self- improvement are key elements needed to initiate significant change in the course of one’s life, personality or way of thinking.